I recently heard a woman claim that “white” people are the only people who can claim they don’t identify as any particular “race”, because there is nowhere they have to feel they don’t belong. I could debate that point. Certainly not all “white” people are welcome in all places. But I believe the point this speaker was trying to make was that the people in power in our country are mostly “white”. Of course I recognize society has classified me as “white”. Of course I recognize that there are more people who are categorized as “white” than people who have any other label of “race” placed on them  in positions of power in our country. I understand how these labels have shaped the power dynamic in our society. But these labels seem so arbitrary today. I understand how racism may continue to play a role in shaping the power dynamic in our country. The idea that the color of a person’s skin or their continent of familial dissent plays any role in determining their value as a person is often viewed as an archaic perspective even as this perspective was common only decades ago. I suppose it is not up for me to say whether I am “white”. My eyes tell me my skin is more of a “Harmonious Gold” on the Behr color scale:

But that isn’t what “white” means when it comes to skin color. Society says I am “white” because I have mostly European ancestry. Society also says that my friends who have mostly African ancestry are “black”. I have a social experiment for you. Ask a group of elementary school students what the opposite of white is. I’d be willing to bet a majority of them will say “black”. But we are not opposites. On the contrary; We are much more alike than we are different. To say I am not white is not to say I don’t recognize that people will try to assign this label to me or even that I benefit from it. Even as I recognize this label as inaccurate when it comes to most color scales, I can identify the alternate use of the term when it comes to skin color. At the same time, I cannot help but recognize how utterly useless this label may be when it comes to practical application.

It isn’t that I’m color-blind. I just don’t see how it matters. I understand that some people take pride in the color of their skin. This seems a little irrational to me. I suppose to say I am proud to be white would be an attempt to align myself with “white” people who have done great things. But our most significant commonality would seem to be the fact that our ancestors came from Europe. I don’t see how their accomplishments are anymore mine than the accomplishments of my other brothers and sisters with different continents of familial origin.

I do see how using these labels as means of identity works to divide us. To say I am a “white” man puts my familial origins even before my gender. So yes, I’ll concede that I am “white”, only because society has a magnificent way of redefining terms. But, in identifying this, I have to recognize that this label is rather useless when it comes to most practical applications. As language evolves with our progression as a society, I envision a future in which these labels are set aside in favor of more useful terms. Would it be such a crime to push for this change today?

To say I am one thing binds me to others’ ideas of that thing. As we each hold a unique perspective of the world, it would seem impossible to conform to every person’s perspective of any given label. Dictionaries are used to best define how a society perceives a given word. But even dictionaries and definitions within them change over time. I recently heard a women express that the word “Atheist” meant to her someone who was “evil” and only interested in satisfying his or her own carnal desires. When recently asked to define “atheist”, I focused more on an atheist’s tendencies to desire physical evidence. But Merrium-Webster defines “atheist” as follows: “a person who does not believe in the existence of a god or any gods : one who subscribes to or advocates atheism”. These labels may be beneficial when it comes to predicting and understanding another’s actions. But to live without these labels enables me to be free to explore my perspective of myself, the world around me, and the world beyond. We tend adopt these labels as parts of our identities and then become invested in these identities. The two-party system in the United States inspires many to vote along party lines without considering whether the candidates for whom they are voting share their principles. Further, when these candidates take office, we defend the politician for whom we voted even as their actions seem unjustified to us. When it comes to something like faith in a higher power, these labels to which we adhere often require even stronger faith. When this faith is challenged, we may be more likely to stand strong in our beliefs, refusing to ever sway even when evidence to the contrary is presented. We often take a perspective similar to the perspective portrayed in the old Christian hymn: “Like a tree that’s planted by the water, I shall not be moved”. But Psalms 1:3 of the Christian bible, seemingly the inspiration for this imagery, would seem to more directly apply to falling to ideas of wrongdoing rather than exploration of faith. And so we argue, we fight, and we kill over our perspectives of these things we cannot conclusively define.  We live in a very physical world. We interact with things outside of us in physical ways. To cling to our limited understanding of anything beyond this world as though it were profound truth would seem futile at best and damaging at worst. When we let go of the notion that we can, with absolute certainty, know anything about the nature of things beyond our world, we may see these things with more clarity than our previous perspective made possible. When it comes to the physical world, things like the beams depicted in the drawing below do not exist. 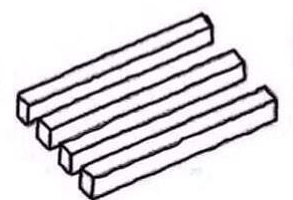 When we try to apply physical characteristics to these things, we end up arguing over the reality of these things: 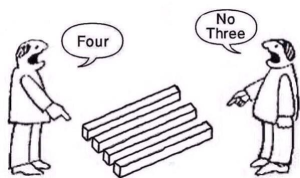 Check Out My Book